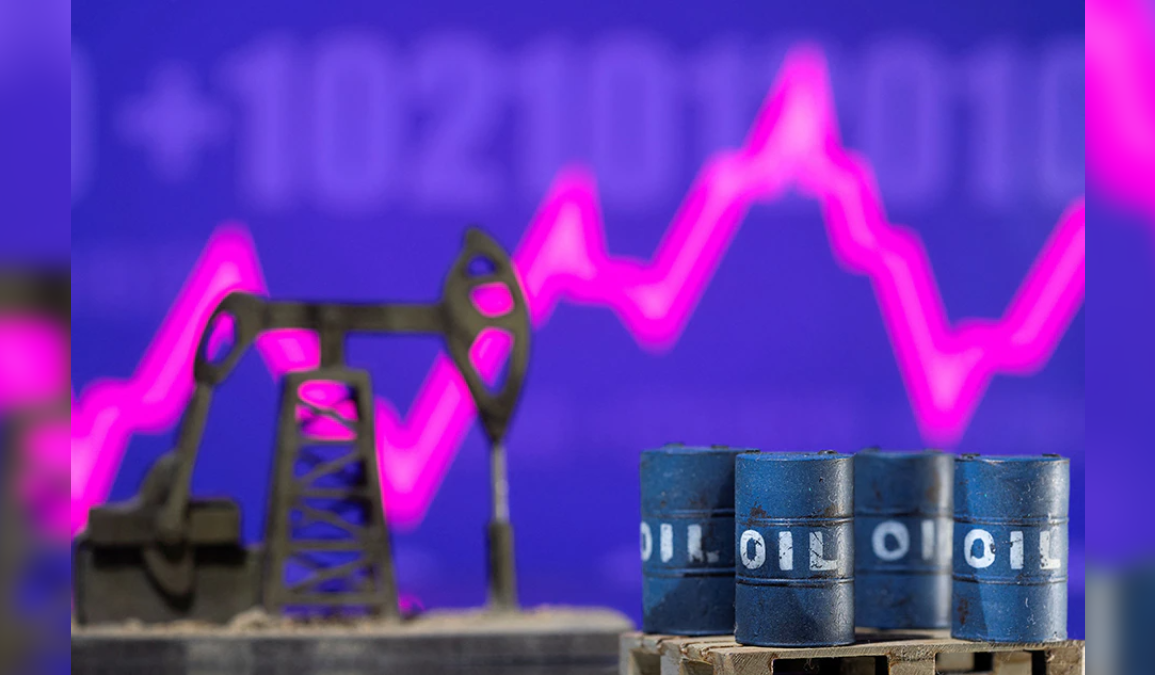 Following Russia’s attack on Ukraine, global financial markets plummeted as the political climate filled up with tensions and uncertainty. Despite the major downfall in different markets, energy stocks have been soaring – for many reasons.

Oil stocks are on a run given the major increase in the commodity’s price – which has now reached over $100 per barrel for the first time since 2014. This increase in price is mostly driven by a massive rise in demand due to fears of supply chain disruptions. This is no surprise given that Russia supplies roughly 40% of the gas to the EU and accounts for almost 12% of the world’s oil supply.

For this reason, oil and gas stocks are on investors’ radar once again and are showing major potential. Given their continuous efforts to ramp up oil production, Viking Energy Group, Inc. (OTC:VKIN) AXP Energy Ltd. (OTC: AUNXF) and Allied Energy Corporation (OTC: AGYP) are some of the energy stocks well-positioned to capitalize on the market’s circumstances.

As a diversified energy company, Viking Energy Group, Inc. (OTC:VKIN) owns interests in oil and natural gas assets across the country. The company is known for engaging in the petroleum exploration and production as well as the sale of crude oil, natural gas. Through its subsidiaries, VKIN delivers specialized energy and power solutions to both commercial and industrial clients.

Since the start of 2022, VKIN has been actively expanding and forming agreements with different entities throughout the country. Through its primary owner – Camber Energy Inc. (NYSE American: CEI), VKIN has been venturing into several other energy sectors – including carbon capture, storage, and power grid operations.

These expansion efforts are looking promising as VKIN recently announced its acquisition of a 51% interest in two entities – both of which own the intellectual property rights to fully developed, patent pending, ready-to-market proprietary Electric Transmission and Distribution Open Conductor Detection Systems. These systems are designed to detect a break in transmission and distribution lines and immediately terminate the power – reducing risk substantially and enhancing public safety.

With this competitive technology, VKIN is well-positioned to capitalize on the increase in demand for safe energy. Robert Stuart and Ronald Smith – recognized specialists with decades of expertise in the electricity production, transmission, and distribution sectors – created the technology and will help VKIN with its integration and sales efforts.

Looking at its financials, CEO – James Doris – previously reported that the company’s balance sheet has been strengthened as a result of its growth efforts. By selling departments subject to high-interest loans and hedging agreements that limited upside, the company reduced its debt by over $100 million.

Check out this in-depth dive and decide whether VKIN is one of the most promising energy stocks this week.

AXP Energy Ltd. (ASX: AXP) and (OTC: AUNXF) is an oil and gas production company that invests in low-risk, high-reward locations across the US. A previous analysis of the company’s resources reported over 10 million BBL in net oil reserves and 4 million in net gas reserves. In 2021, AUNXF’s acquisition of the Magnum Hunter Production added over 100 thousand acres and 300 wells to its portfolio – making it the fourth largest gas producer in Kentucky.

Back in July of 2021, the company revealed its impressive portfolio of wells consisting of over one thousand actively producing wells, 175 wells temporarily offline and to be reconnected in coming quarters. It also reported an additional 111 wells that are being reviewed to be brought online – with or without workover – as well as 165 abandoned wells scheduled for P&A.

In light of this solid portfolio, AUNXF released a quarterly activities report in January highlighting its progress. Selling 3,795 more barrels of oil this quarter compared to last, AUNXF saw a 31% increase in its revenue compared to the prior quarter. similar increase in its revenue which is up 31% over the prior quarter. This, in addition to $4 million cash on hand could position the company to ramp its operations even further.

With a new drilling division that pursues cost effective increases in oil and gas production, the company is expanding its drilling operations across its owned leases. On February 3rd, the company announced its plan to develop and complete the first two drilled and uncompleted Illinois Basin oil wells. AUNXF is prioritizing these wells given their favorable economic conditions and cost-effectiveness.

As the company finalizes these two drilling operations, it is well-positioned to capitalize on newly identified seven drilled and uncompleted wells. By March 2022, they intend to initiate drilling on the first high impact vertical infill well – which is located on the Dacy Lease. The Dacy Lease is marked as a priority target after a thorough internal geological review revealed the lucrative nature of the area.

CEO Tim Hart is bullish on the company’s growth plans in 2022 as it “focuses aggressively on growing oil and gas production by drilling new, low-cost vertical wells and bringing these DUCs online to deliver quick, easy gains.” As the WTI oil price continues its strong upward trend, Hart emphasizes the upside potential as the company targets oil while “bringing gas online that can be sold into sales channels that are not impacted by downstream outages”.

Even though AUNXF is yet to react to the Russia Ukraine news, that could change as the market catches on – especially given the company’s existing exposure to the oil and gas space. Get to know more about this stock here.

Allied Energy Corporation (OTC: AGYP) is a domestic producer known for its mission to purchase and rework existing oil and gas wells across the US. For years now, the company has been utilizing its technology to access existing, abandoned oil and gas wells. With a proven record of success in identifying and reworking existing oilfields, AGYP could be one of the most promising energy stocks to invest in as demand for oil increases in light of the russia ukraine crisis.

With 12 exploration projects in the works, AGYP has had to work consistently to maintain its production timeline. These efforts appear to have paid off given that the 300-acre Gilmer site producing oil and gas since October and the 980-acre Green Lease producing since September.

The company has major plans for both sites in 2022. For the Green lease, AGYP plans to install the second ESP on Well X-3 once the assessment of Well M-1 is complete. If both wells prove successful, AGYP plans to evaluate three other wells at the site. Upon ensuring favorable production rates, AGYP will focus on developing a 3D seismic survey to identify other potential drilling targets on the site.

Looking at the Gilmer lease in 2021, the pump set-up yielded an average of 160 to 300 barrels of total fluids on a daily basis. However, the company is adamant on achieving maximum potential and is intends to establish a pump setup that attains 1000 barrels of fluid per well every day. To do that, AGYP is now working with Tri-County to install a 3-phase/200 amp service to the lease before Q1 ends. If successful, AGYP plans to set an electrical submersible pump (ESP) in one of the wells to produce up to 1500 barrels of fluid daily. By doing this, the company could ramp up production and easily capitalize on the increasing supply shortages.

With these two lucrative sites now operating, the company has dedicated its efforts to preparing its newest and most promising site for production – the 325-acre Prometheus site. By drawing down the fluid at a pace of 2000 to 2400 barrels per day, the Prometheus site has generated a total of 3 loads – with each load carrying 160-170 oil barrels – for the company in 2021.

As of Q1, the company reported continuous sales generated from the Well 1H. However, to maximize its potential and improve its oil production, AGYP is now focused on installing a transfer pump and flaring all the gas to reduce the pressure in the well. If successful, these efforts will result in an increase in oil production for the well and will lead to massive increase in the site’s growth numbers.

To facilitate further growth, the company is now planning to uplist to a higher exchange will increase the company’s visibility on a global scale. With oil prices climbing due to the current political state, an increasing number of investors will be drawn to the oil and gas industry. For this reason, uplisting to a higher exchange seems like a strategic decision that is bound to result in greater visibility and ultimately increase shareholder value.

Aside from its uplisting plans, AGYP recently announced it is implementing an ongoing share repurchase program for its common shares. The company wants to lower its public float by repurchasing shares on the open market or making private acquisitions. While further details regarding this buyback is yet to be disclosed, investors are bullish on this share buyback could lower AGYP’s already low float of 47 million and position it for a major run. With this in mind, AGYP’s CEO – George Montieth – believes “these initiatives will benefit both the company and shareholders by building real value now and in the future.”

Despite all these milestones, 2022 could prove even more profitable for AGYP. With a bullish oil market, the company stands to benefit immensely from the increasing oil prices as it ramps up production in its existing sites and explores more lucrative sites across the country.

For a deeper look at AGYP’s various ventures, check out this article and discover the company’s true potential in 2022.

In light of their constant growth efforts – VKIN, AUNXF, and AGYP – could be smart buys as energy stocks soar in the market. as they continue producing, the companies seem poised for growth in the coming months as demand increases in fear of supply chain disruptions. These three companies are clearly realizing the market’s potential as they are now more focused than ever on expanding and increasing production. With conflicts escalating and oil and gas prices soaring, bullish investors might find these three promising energy stocks profitable investments in a hot-red market.