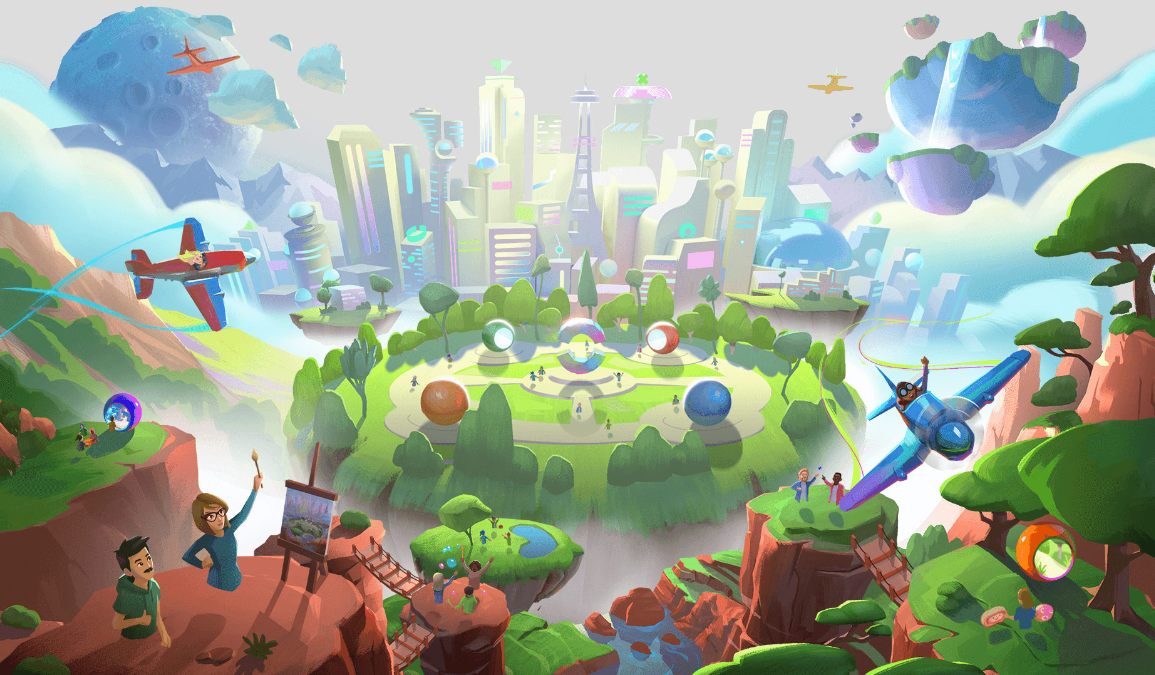 One World Universe Inc. (OTC: OWUV) – a corporation providing humanitarian aid around the world through its profits – is embarking on a hectic month filled with catalysts. OWUV has previously implemented projects giving people access to vaccines, medications, and educational support programs. But the company made headlines as 2021’s metaverse stock when it announced its purchase of virtual land in the Metaverse. This and other catalysts have driven OWUV up 277% since the initial announcement which makes it a metaverse stock to watch.

OWUV was quick to jump on the opportunity of owning real estate in the metaverse, as the company stated that “available land is very limited, and we are in the midst of a land grab. Many major crypto whales and famous companies such as Atari, Adidas, Binance have bought up large blocks of land.”

With this in mind, OWUV acquired a new subsidiary – Meta Universe Holding Corp. – which will specialize in all Metaverse projects, services, and assets. Meta Universe Holding is in the process of securing a 3×3 parcel within the Sandbox metaverse through a transaction of nearly $125 thousand.

As a Metaverse platform, The Sandbox gives players the opportunity to monetize voxel ASSETS and gaming experiences on the Ethereum blockchain. With a thriving NFT market and LAND token, the rush to buy up a portion of the remaining 166,464 LANDS could make OWUV’s investment a wise decision. Each LAND is not only digital real estate in the Sandbox’s Metaverse but a unique NFT and its value has increased rapidly over the last quarter. At the moment LAND typically sells for more than $10,000 despite going for around $40 at the start of 2021.

Owning land in The Sandbox will give OWUV the chance to host events, create games, vote in metaverse’s governance, and monetize assets. The platform offers various revenue streams through hosting, staking, renting, selling NFT assets, and advertising as well.

With the same thing in mind, OWUV is looking to purchase land in Decentraland which has 90,601 individual plots of NFT land. Land on Decerterland can go for 3487 MANA or $16,737 but the most expensive land purchase was for $2.43 million last month. The average price for this land has gone up from $500 to $30,000 giving OWUV’s investment a potential upside as interest in the Metaverse continues to grow following Facebook’s name change.

OWUV assured investors that the land purchase was just the first step for Meta Universe and the company is planning joint ventures and more asset purchases in the near future. The company has already made good on its plans by purchasing property in Upland – another blockchain-based game for digital properties.

This Monopoly-style game is mapped onto the real world and has seen recent success after minting 2,000 NFT properties in 10 minutes for Bronx, NY. Some of these NFTs tied to the metaverse game were flipped for 50 to 100x their minted purchase price which could mean OWUV’s investment in Upland’s properties throughout Brooklyn, Staten Island, Chicago, Nashville, and Santa Clara will grow in value as these metropolises start to mirror their real-life counterparts.

If Meta Universe Holding Corp proves successful as the company’s Metaverse arm, then OWUV is considering spinning it out in 2022 – potentially giving OWUV shareholders dividends from the new stock. But the company has made progress on other fronts as well. The new stock can be a successor to OWUV and also become one of the hot penny stocks investors watch closely.

Announcing its intention to make a crypto coin that facilitates its work with the Metaverse, NFTs, and the blockchain, the company’s CEO shared his perspective that “giving out digital assets as a dividend was a unique way companies were utilizing the blockchain to fight the shorts or potential shorts due to their need to cover, not only the shares but the dividends also.” The CEO – Jerry C. Craig – clarified that if such a situation occurred, this could be an option.

Meanwhile, OWUV has plans to announce two more acquisitions planned before the end of the year. One will be in the sports industry but the other’s sector is still being explored as the company considers options in crypto, blockchain, biotech, cannabis, content streaming, and space travel sectors. OWUV’s management, which includes an OTC favorite – Caren Currier – as CFO, will ultimately determine the best sector from a financial perspective.

Seemingly bullish on OWUV’s chances in the new year, Currier shared that “The additional 3 companies will position OWUV with the ‘meat and potatoes’ shareholders have been waiting for with an impressive assortment of holdings which will better position us for success in 2022”.

It seems that investors share her enthusiasm especially after Currier announced plans for a buyback of approximately 5 million shares before the end of the year. This decision was taken to ease shareholders’ dilution concerns and is a bullish sign for the company’s future as it works to deliver on its promises to shareholders.

To highlight the company’s commitment to shareholder transparency, OWUV recently released notes from its latest BOD meeting. The company is already showing major signs of progress as it outlines its roadmap for growth in 2022 – detailing the direction of its current operations, new business ventures and future board hires.

Going forward, OWUV announced its plans to enter into the real estate industry as it works on establishing a business in Houston, Texas. Because Houston remains one of the top real estate locations in the US, OWUV intends to capitalize on the growing demand for commercial and residential property in the area. This venture could prove a lucrative revenue stream for the company as properties continue to be purchased, remodeled, and sold or rented for profits.

As a part of its aggressive growth-by-acquisition model, OWUV recently acquired a company specializing in corporate financial audits and legal documentation filings. Through this, OWUV is capitalizing on the increasing number of “expert market” companies demanding audited financials to become current with the OTC. Aside from generating major revenue, this acquisition will allow OWUV to deliver on its own uplisting goals. With this in mind, the company has assured investors that its first order of business is to gather all necessary filings and prepare for an OTCQB listing before EOY. In light of this, many are bullish that a NASDAQ listing is imminent.

By utilizing the profits generated from this acquisition and new business ventures, OWUV is taking steps to deliver on its mission and improve people’s lives through global humanitarian efforts. As of now, the company is in the process of creating a philanthropic real estate business in Florida where it intends to remodel and donate a home to a US Veteran every year. Through this, the company intends to provide residences to homeless veterans as well as assist in employment opportunities. This venture is already in its final stage and is expected to be fully operational as soon as Q2 2022.

To sustain this growth, the company recently announced the addition of a retired major general to its BOD. This addition could open a plethora of opportunities for growth and could facilitate connections through military contracts, sector-specific involvement, and a potential spinoff company. To honor the major general, the company intends to launch a rare NFT collection and donate all proceeds to a military non-profit foundation that assists in military and veteran aid.

In terms of its NFT plans, the company is currently working with agencies, celebrities, and artists to promote various famous NFT collections as well as create multiple rare 1 of 1 NFTs – which will be auctioned for real-world application and potential meet and greet opportunities. to further position itself in the metaverse, the company is partnering with ILUS to create a new crypto coin. While a timeline is yet to be confirmed, the company intends to release further updates regarding its metaverse, crypto coin, and NFT plans in the near future.

Aside from all these catalysts, investors are bullish on OWUV given its solid share structure – comprising of 200 million AS and over 199 million OS – as well as its promise of no dilution. In fact, the company has garnered a reputation for its frequent share buybacks – 5 million shares in December 2021 and an additional 250,000 shares on February 4th. With these share buybacks, the company is decreasing its already low float of 58 million – which in turn could position OWUV for a massive run as its many impending catalysts play out.

With its long list of catalysts, OWUV has already seen major movement and many investors have taken profits thanks to @MoonMarket_ alert on this promising metaverse stock.

OWUV is currently trading at $.2 with resistance at .2104. The stock shows primary support at $.1653 as well as secondary support at around $.1497. Accumulation has been fluctuating but is seeing an uptick recently. Meanwhile, the RSI is holding at 68 – indicating the stock is overbought- and MACD is on a recent bullish crossover.

Given that the stock is trading near its resistance and shows a high RSI, investors could secure a starter position on OWUV before any of its catalysts sends it on a run past its resistance. From there, bullish investors with high conviction on OWUV could average up on their investment. As the stock continues its run-up, it is important to remember not to chase in order to minimize the risk of your investment.

With its long list of upcoming catalysts, OWUV could be a metaverse stock to look out for. The company’s upcoming acquisitions, entrance into the metaverse, and share buyback could likely prompt a run sooner than expected. In light of its ongoing efforts as well as detailed future plans, inventors are bullish 2022 could be the year OWUV sees new highs. As the company continues venturing into the metaverse, launching NFTs, and developing a crypto coin, OWUV is shaping up to be an emerging leader. In light of this and its long-term mission, investors are waiting for further updates and are bullish that this low float stock could see a major run-up on news from the company.